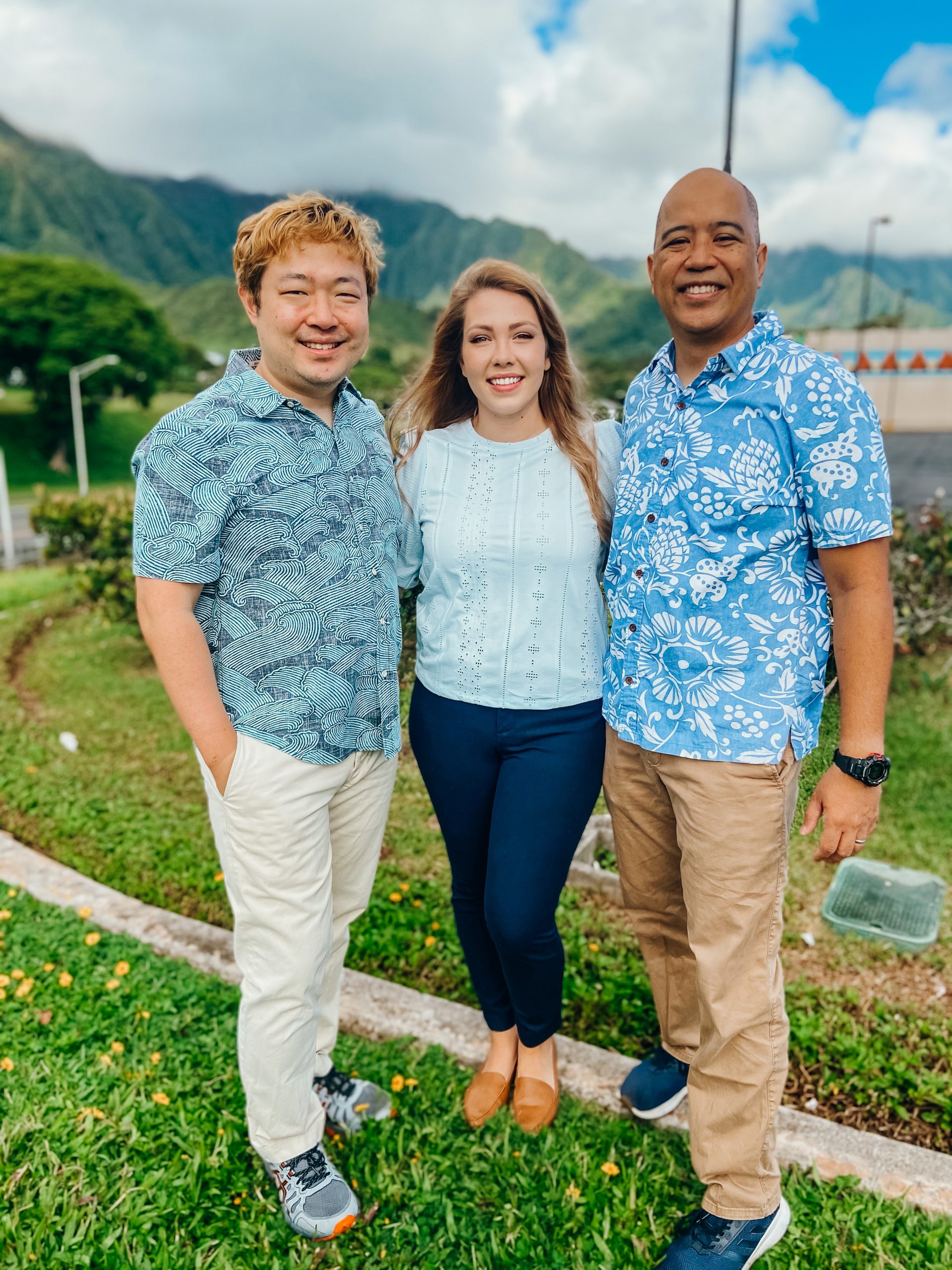 Dr. Revestir was born and raised in Kaneohe and graduated from Iolani School. As a boy growing up in Kaneohe, he hiked all over the Ko’olaus with the Boy Scouts and eventually made the rank of Eagle Scout in 1992. He attended the University of Hawaii where he majored in French and History. He attended the University of the Pacific School of Dentistry and earned his Doctor of Dental Surgery degree in 2001. Dr. Revestir then served in the U.S. Army for three years, being stationed at Fort Hood, Texas. During his Army career, he deployed to Iraq for six months in support of Operation Iraqi Freedom. He continues to serve in the Hawaii Army National Guard as the State Dental Officer.
Dr. Revestir became a partner of Temple Valley Dental Group in 2008 after deciding that he wanted to serve the community that he grew up in. He takes great pride in his work and places a great amount of detail into his dental treatment. He has broadened his dental knowledge through hundreds of hours of continuing education since dental school. One of his dental achievements includes being named as one of Honolulu Magazine’s Top Dentists in multiple years.
Along with his wife Deidre, Dr. Revestir and children Evan (14), and Emma (10) enjoy the beach, hiking, and Scouting activities.

Dr. Kim started his dental career as a part-time assistant at Beverly West Dental Group in Los Angeles in 2008. During this time, he was also enrolled at the University of Southern California in their biology and East Asian Language programs from 2003 to 2008, earning a Bachelor of Science in Biology and a Bachelor of Arts degree in East Asian Languages. Following his undergraduate studies, he began his dental education at the Herman Ostrow School of Dentistry at USC in 2009, graduating with a Doctorate in Dental Surgery in 2013.
Shortly after graduating, Dr. Kim began his professional career in the United States Army as an active duty Dental Officer. He attended the Basic Officer Leadership Course in early 2014 and began his first military tour at Tripler Army Medical Center where he practiced dentistry until August of 2017.
After separating from active duty Dr. Kim joined two civilian dental practices as an associate: Smile Dental Center in Waipahu, Hawaii and Temple Valley Dental Group in Kaneohe, Hawaii where he works until today.
Dr. Kim is a member of the 50th State Dental Study Club, Hawaii Dental Association, and American Dental Association. He is certified to use Computer Aided Design/Milling technology to fabricate fixed prosthesis as well as surgically place and restore dental implants. He is also fluent in English and Korean, and speaks conversational Japanese.

Dr. Gasser is from a small rural town in Kentucky, where she grew up on a horse farm. She attended Morehead State University where she majored in Biomedical Science. Following her time at Morehead, Dr. Gasser moved to Louisville where she attended the University of Louisville School of Dentistry. While in Kentucky, Dr. Gasser volunteered at a rural dental clinic as well as working at the local office neighboring her hometown.

In May 2020, Dr. Gasser and her family moved to Oahu for her husband Ollie’s military career at Tripler Army Medical Center. After getting settled, she joined the Temple Valley Dental Group team in January 2021 and has loved the office, it’s patients, and the beautiful area of Kaneohe since. Dr. Gasser enjoys working with patients of all ages and strives to build trusting relationships to make them feel comfortable while creating exceptional smiles together.

In her free time, Dr. Gasser enjoys spending time with her husband and 2 year old son Benjamin, relaxing at the beach, and exploring the island. 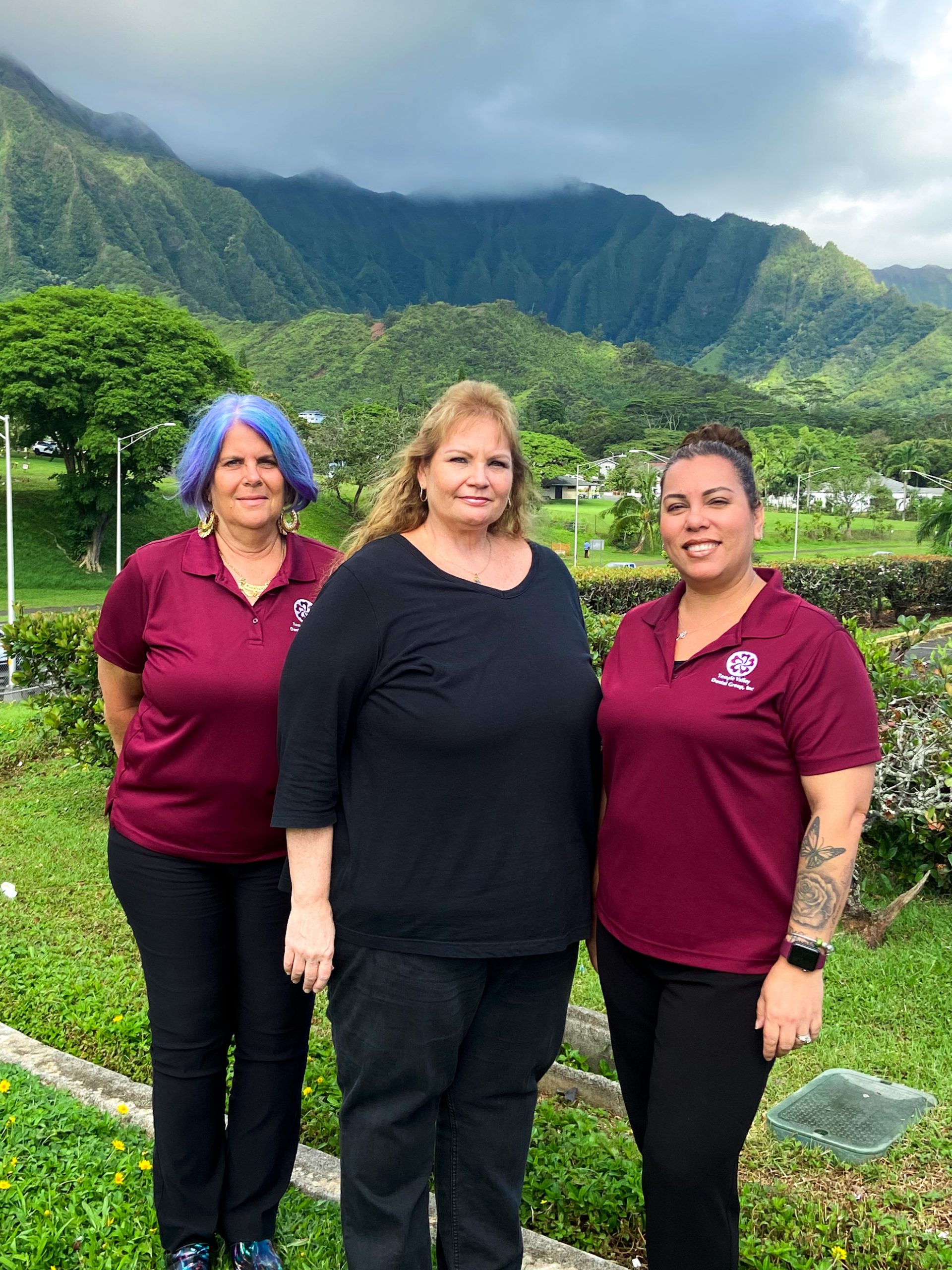 Cheryl has been with the Temple Valley Dental Group since early 1980, when she started as the receptionist. She was raised here in Hawaii, and went to Kailua High School. Along with her husband, Bud, she has lived in Kaneohe for many years. The rest of her family consists of two Alaskan Malamutes, “Dax” and “Pepper”. Cheryl is an avid animal lover and supports the organization Wolf Haven and Defenders of the Wild Life. Her particular concern is the reestablishment of the wolf population into their original habitat. Aside from the dogs, she keeps busy with working card making and scrapbooking. She has also found a love of golf, and plays rain or shine.
Her forty plus years in the office has given her considerable experience in handling all kinds of insurance claims, as well as other areas of office management she oversees. She is great at remaining calm during busy times, and her warm personality and pleasant smile are some of Temple Valley Dental Group’s greatest assets.

Luvel was born in Honolulu, raised in Palolo, and graduated from Kaimuki High School. She has been working in dentistry since 1995, starting out as an orthodontic assistant. In 2000, she joined the team at the Temple Valley Dental group as a chair side dental assistant to Dr. Briggs. She is now our scheduling coordinator at the front desk who looks forward to booking your appointments! Luvel married her best friend, Dion and had her son Hunter in 2005 and Ezekiel in 2010. She likes to spend her free time tinkering around the house.

Linda L Smith was raised on the Windward side of Oahu and a graduate of Kalaheo High School. Retiring after 31 years with UPW, she joined the Temple Valley Dental Group family in December 2020. She enjoys nothing more than spending quality time with her two daughters and their families, which include 3 amazing grandchildren. When She’s not at work, you will most certainly find her enjoying her grandchildren and all of their extra-curricular activities.

Darian was born and raised in Kailua, and graduated from the University of Hawaii Dental Hygiene Program in 1997. He started working at Temple Valley Dental Group in 2002, taking over as the head of the hygiene department in 2004 to 2019.
He enjoys fishing, diving and wood crafting. In 2004, he bought and re-built his first home in Kaneohe.

Jodi was raised on Maui and graduated from Baldwin High School. She moved to Oahu in 1993 and completed the University of Hawaii Dental Hygiene Program. SHe has been working here at Temple Valley Dental since 2003.
She enjoys reading, shopping, hiking and travel. In 2005, she married a local guy from Kaneohe, and in 2007, gave birth to a baby girl. 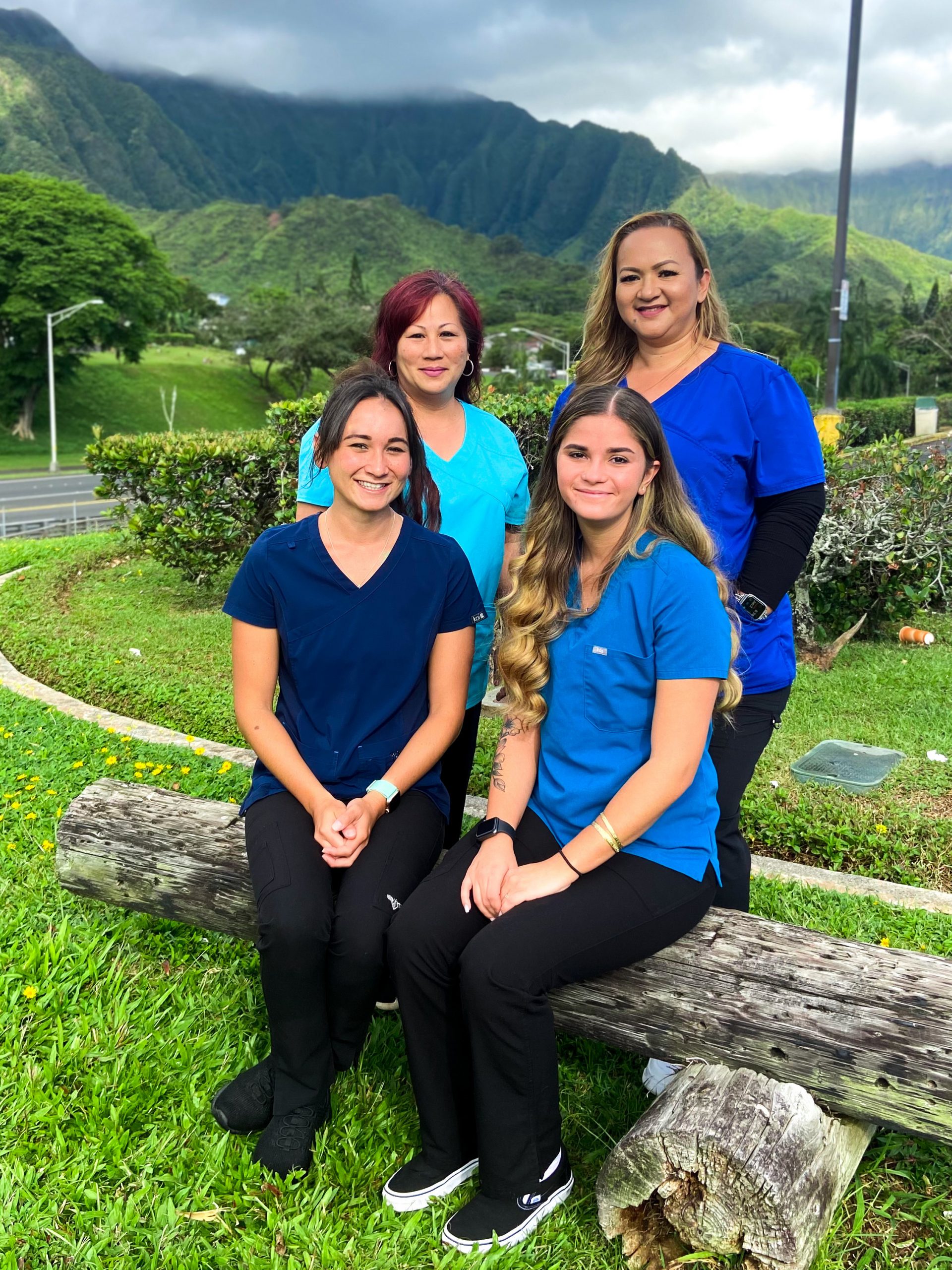 As a child, Amy was a patient at Temple Valley Dental Group. SHe enjoyed her experience here so much she has come back to work with us. Amy has been an assistant for our team for 6 years and is now Head Assistant. She grew up in Kahalu’u and now resides in Kaneohe with her family. When she’s not caring for our patients she’s enjoying all the beautiful outdoor activities the island has to offer.

Jo has been working in the dental field for 34 years but has learned a lot during her past six here at Temple Valley Dental. Jo was raised on the windward side, and enjoy my family time doing beach and ocean activities.

Christol was born and raised on the west side of Oahu, in Makaha. As a child she was very passionate about art and it has progressed in adulthood where she used her talents in dentistry and decorating the office. She has been blessed with four handsome sons & a wonderful husband of 3 years. She enjoys spending time with family and friends, singing karaoke, going on family vacations and working as a dental assistant for Temple Valley Dental Group.

Katelyn was born in Maui and moved to Oahu at age 12. Katelyn began her dental career in 2019 after graduating from the Red Cross Dental Assistant Program at the Schofield Barracks Dental Clinic.

Font Resize
Contrast
Accessibility by WAH
Call Us Text Us